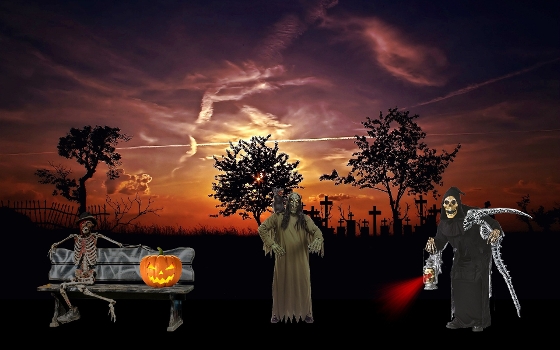 On a dark and stormy night, a man named Sid was hitchhiking on a quiet road. The wind blew loud moans across the countryside, and the trees rustled menacingly in the darkness. Sid was getting nervous, and he breathed a sigh of relief as a car from nowhere came to a gliding stop by the side of the road. Sid jumped into the back seat and started to offer thanks, but he realized that the front seat was empty. Then, to his amazement, the vehicle began to move!

Slowly it crept down the road. Sid’s eyes bulged as it came to a curve, and a floating hand seemed to reach through the window to turn the wheel. For a moment, Sid was paralyzed with terror, convinced that something mysterious and terrible was happening. Finally he gathered his nerve, threw the door open, and jumped from the car. In his fright, he ran without stopping until he made it to the next town.

He found a restaurant and staggered inside for a drink to quench his thirst. About 15 minutes later, two men, wet and cold, entered the establishment. As they were ordering food and drinks, they looked over and saw Sid.

“Hey,” said one of the men to his friend, “isn’t that the idiot who got in your car while we were pushing it?”