Posted on October 3, 2022 by Gino Pezzani
Posted in: September 2022 Newsletter

Canadian GDP edged up by 0.1 per cent in July, following a similar increase in June. Growth in goods-producing industries (+0.5 per cent) offset declines in service-producing industries (-0.1 per cent) as GDP grew in 11 of 20 subsectors. Canadian real GDP is roughly 2.3 per cent above its pre-pandemic, February 2020 level. Preliminary estimates suggest that output in the Canadian economy was essentially flat in August. GDP from the offices of real estate agents and brokers dropped 3.4% in July, the fifth consecutive decline, as rising interest rates continued to restrain home sales.

GDP growth in recent months, though still positive, is showing signs of slowing. That slowdown will likely continue as the Bank continues its tightening cycle, particularly in interest rate sensitive sectors like housing. As expected, the Bank raised its overnight rate in September to 3.25 per cent and the final destination for the overnight rate may be closer to 4 per cent. However, with the rate now above the bank's estimate of the neutral rate, meaning monetary policy is no longer stimulative, increases in the overnight rate are expected to slow in subsequent announcements. 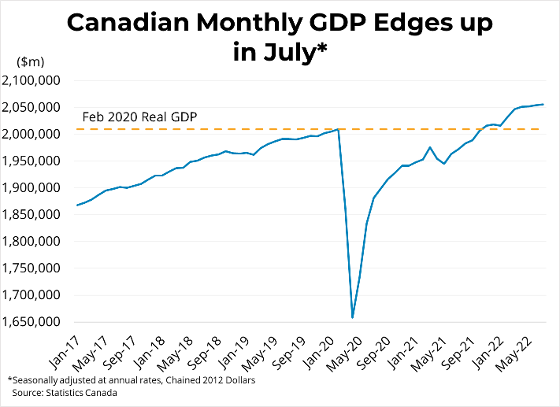