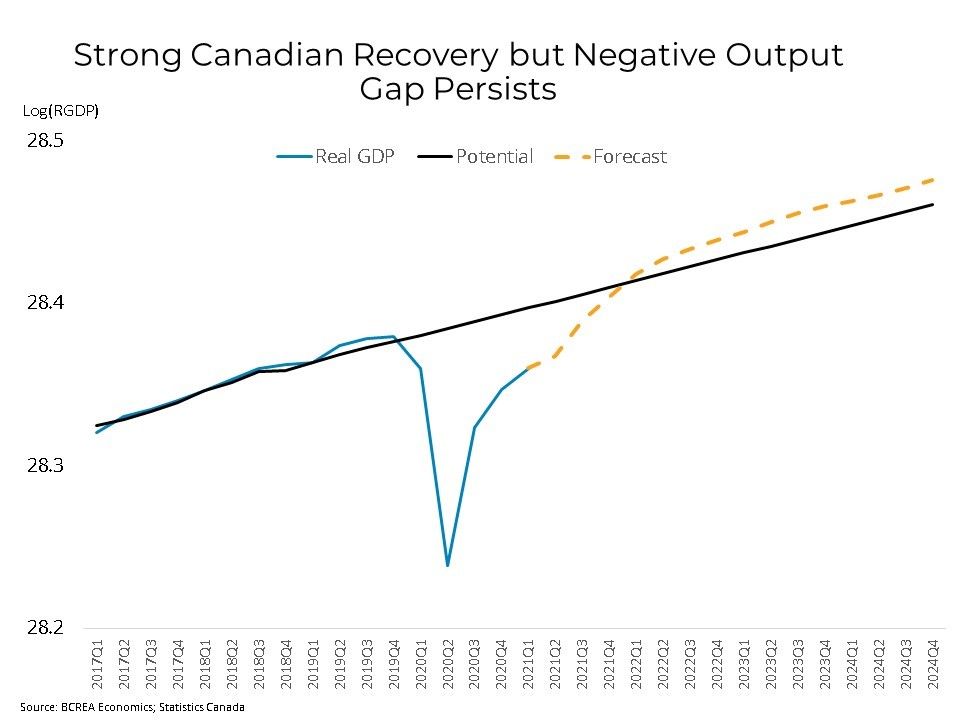 The Canadian economy expanded at a 5.6 per cent annual rate in the first quarter of 2021, including very strong growth in March. However, restrictions due to the third wave of the pandemic point to a minor contraction of output in the month of April before getting back on track for the rest of the year. Growth was led by a 9.4 per cent increase in housing investment, which led the overall recovery, rising 26.5 per cent since the first quarter of last year. Household spending was up 0.7 per cent in the first quarter or about 2.7 per cent on an annualized basis as household disposable income rose for the first time following two consecutive declines . Households continue to save at historically high rates during the pandemic. The national household savings rate rose to 13.1 per cent in the first quarter of 2021, more than double the savings rate this time last year. As vaccinations continue a strong ascent, we expect the Canadian economy to record about 6 per cent growth this year.

The Canadian economy is enjoying strong growth and that growth should continue through most of this year as ramped up vaccinations combine with pent-up demand and unprecedented household savings. While strong economic growth this year is a near certainty, what is less certain is the impact that growth may have on inflation and therefore the direction of the Bank of Canada. Most view the recent increase in inflation as a temporary phenomenon driven mainly by “base-year” and other transitory effects. While there is some risk that an over-stimulated economy may be more inflationary than currently believed, there remains considerable slack in the Canadian economy and financial markets remain unconvinced that the economy is headed for markedly higher inflation. That has left government bond yields and fixed mortgage rates low and stable for the past several months.